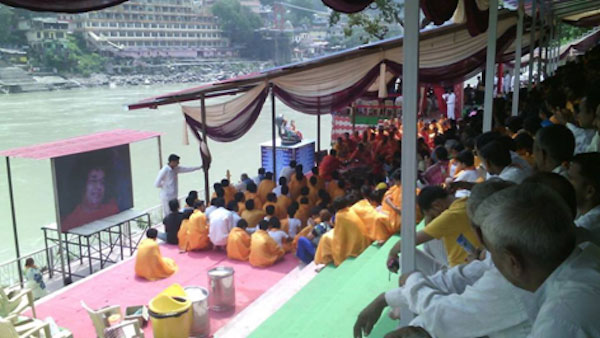 The first day of the Sri Sathya Sai Ghat inauguration was filled with ritualistic offerings to Mother Ganges. It was so nice to see Brother Veda Narayana and team from Prasanthi take up the whole proceedings with excellent rendition of relevant mantras for the occasion. It was so nice of the think tank to choose these noble souls instead of so called BIG priests many of whom have shifted their loyalties, after getting fame and name courtesy of Swami.

The live proceedings of the whole ceremony was icing on the cake and the whole team of SAIONE APP, Sri Sathya Sai Organisations need a special appreciation for this effort. At around 8:30PM, the blessed devotees took part in the Ganga arathi which was followed by Swami’s arathi in Rishikesh which indeed is an emotional moment for all the assembled devotees.

Swami’s Padukas to be Installed on the Banks of River Ganga:

At 5PM the chief Minister of Uttarakhand, Sri. Harish Rawat will be visiting the Sri Sathya Sai Ghat to inaugurate the statue of Mother Ganges and statue of Vishnu and to personally appreciate the noble gesture from the Sri Sathya Sai Organisation. This will be followed by bhajan programme by veteran bhajan singer Sri. Anoop Jalota .

Trustees of Sri Sathya Sai Central Trust, Sri. Nimish Pandya, All India President, Sri Sathya Sai Organisations  and his team have done an excellent job. The Sai community all over the world appreciate your good work which is complimenting the sentiments of devotees of Bhagawan

The Kerala Sai Organisation has planned some very unique programmes with talks by people from different walks of life. To start with it was the turn of Sri. Sabarinadhan, one of the youngest members of the Legislative Assembly of Kerala who spoke in length as how the world is progressing in the field of education, medicine and the rold to be played by the youth. He fondly remembered his association with Ratan Tata and team when they took up some innovative projects in Prasanthi Nilayam few years ago.

This was followed by a close to a one-hour soulful rendition of Sri Vittal Vinod Bhagavatar which was followed by bhajans, arathi and prasadam. Puttaparthi in the recent past is buzzing with lots of activities and Onam season is always special.

With Pranams at the Lotus feet of our beloved Bhagawan